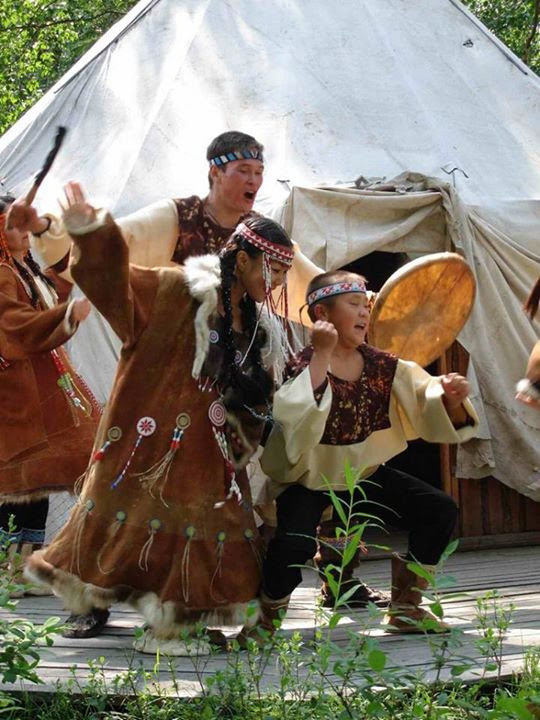 “Dancing is our Prayer”

This picture is showing native Siberian Itenman ( or Itelmens) people in their traditional dress. Itenmans (which means ‘existing’ , ‘living here’, ‘an inhabitant of dry land’ or just ‘a human being’) are the original inhabitants of the Kamchatka peninsula, East Siberia (Northeast Asia)

(Read more:
The Itenmans are traditionally fishermen and hunters and they are reputably the best herbalists among the Siberian peoples. Their native lands, Kamchatka peninsula in East Siberia, was colonialized in the 18th century by the Russians. Russian colonizers brutally used conquered peoples in the suppression of their neighbours. At the beginning of the 18th century the conversion of the Itelmens to Russian Orthodox Christianity had already begun. Monasterys were built, and from the 1740s on Russian peasants were settled on the peninsula. The Itenmans found themselves under strong economic and ideological pressure. The agents collecting tribute were often neither fair nor honest and went unpunished. When the amount of fur was not considered to be sufficient, they requisitioned dried fish, seal oil, cedar nuts, and even sledges and boats. A part of the population was constantly kept hostage. The Itenmans expressed their anger in several uprisings (1706, 1711, 1731) and in 1740 when almost all the Itenmans rose to fight Russians. The uprisings were brutally suppressed and many Itenmans were deported and their tribes dispersed.

Gradually the Itenmans had to resign themselves to the presence of the Russians. Following the example of the Russians they began to use iron tools, fishing nets, new utensils and clothes. Survival was hard for the Itenmans. The Russian tax-collectors were not easily satisfied, and tributes were demanded even of the dead. Diseases (typhoid fever and smallpox, for instance) introduced by the Russians had a devastating effect. In the 19th century trading became a little more active. Firearms, ammunition, alcohol, tobacco, tea and other usual colonial goods reached the territory of the Itenmans. Quite soon many people had debts, frequently as a result of a susceptibility to vodka… Despite colonialisation, assimiliation through christianization and communism Itenman tribal Shamanism survived…)