Sad! Do you think the Viet government would pursue an investigation on the death of these boys? 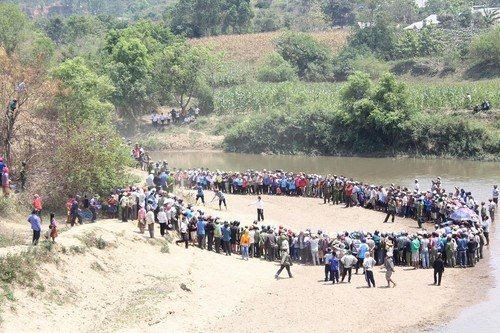 On Thursday 13, this afternoon, a fisherman from Cu Dram village went to fishing at Krong Bong river, and he discovered a pair of pants, 4 shoes and hands of deceased buried in sand at the riverside. He then reported to local authority for excavating the site.

After authorities dig about 50 cm from the layer of sand, they found 5 death bodies, who are Hmong students from the areas. The subjects started rotting and smelly.

These students have been missing since Monday, according to Hmong Public’s news contributor in Vietnam.

Currently, authorities are conducting autopsies to investigate the causes of death.

However, our news contributor said that these victims are Hmong-Christians, 4 victims are from PaoChoua village and 1 victim is from Ea Ba village in the CuDram area, Krong Bong district, Dak Lak province.

All these Hmong students are in classes from 7th grade to 12th grade, according to Hmong Public’s news contributor in Vietnam. The victims died at least 4 days ago and no one knows the cause of death is because of religious or racial discrimination, everything is under investigation by authorities, the source told Hmong Public.

Vietnam local news reported that each family of the deceased will receive 2 million Dong (about $95) from the local government.