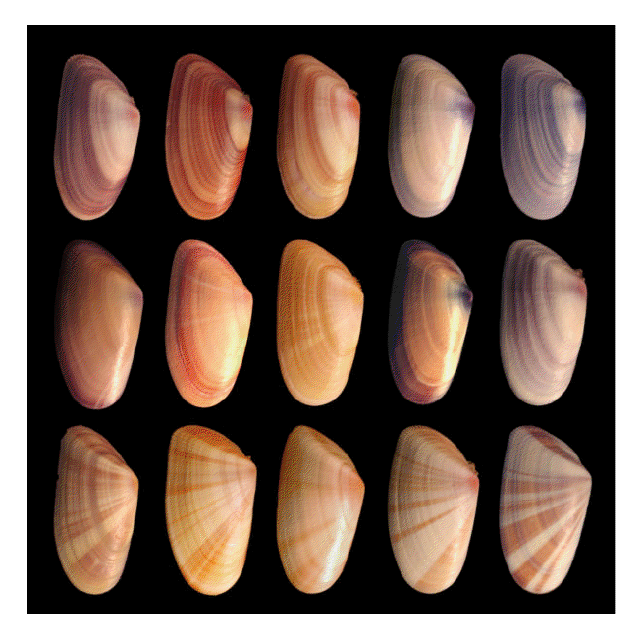 Why is blood quantum important?
-Written By Warren Jones

Short answer, it’s not. It’s good to be proud of whom you are and where you come from but as this page has demonstrated we don’t all look the same. Some of us are dark, and some of y’all could pass for a “white” person. Race is a social construction, what that means is it is something we as humans made up. It was a way for us to differentiate ourselves by where we come from, and what we look like. The differences you see between the “races” are what are known as phenotypes. Donax variabilis is the shellfish shown here, Coquina is the common name. As you can see there is lots of variation in the pattern and color of the shells but they are all the same species.

The US government uses blood quantum as a way of deciding who is “Indian Eskimo or Aleut”. The result of that though is that my kids, who sing Yupik songs, ate blueberries with seal oil for breakfast, and dry fish for lunch are not as “Yupik” as I am. If they don’t choose to marry an Alaska Native woman than at some point my descendants will no longer be considered Yupik. That is inevitable as we expand out of our ancestral homes, for me I fully intended to marry a Yupik woman but as fate would have it I met and married my wife who comes from Argentina and is of Spanish and Italian descent.

This is problematic for us in the future and I am 100% certain we will resolve this in my lifetime but the reason I wanted to talk about it here is because of how often we describe ourselves using blood quantum. Which is fine, that’s how I describe myself; I say I am Gwich’in and Yupik to honor my ancestors and let
people know where I come from. I just want to send out a reminder that it’s not important what percent native you are, what matters is loving the land we came from, respecting our values and honoring our cultures, that is the important thing.

I also wanted to add that this doesn’t mean racism isn’t real, but rather that race is something humans
made up.

Quyana for reading, kenkamken to all my Yupik people and love to the rest!

Choose how you communicate with friends. Introduce Yourself or leave your contact information at Hmongs & Native Americans Websites & Resources. Your Friends. Find Friends.